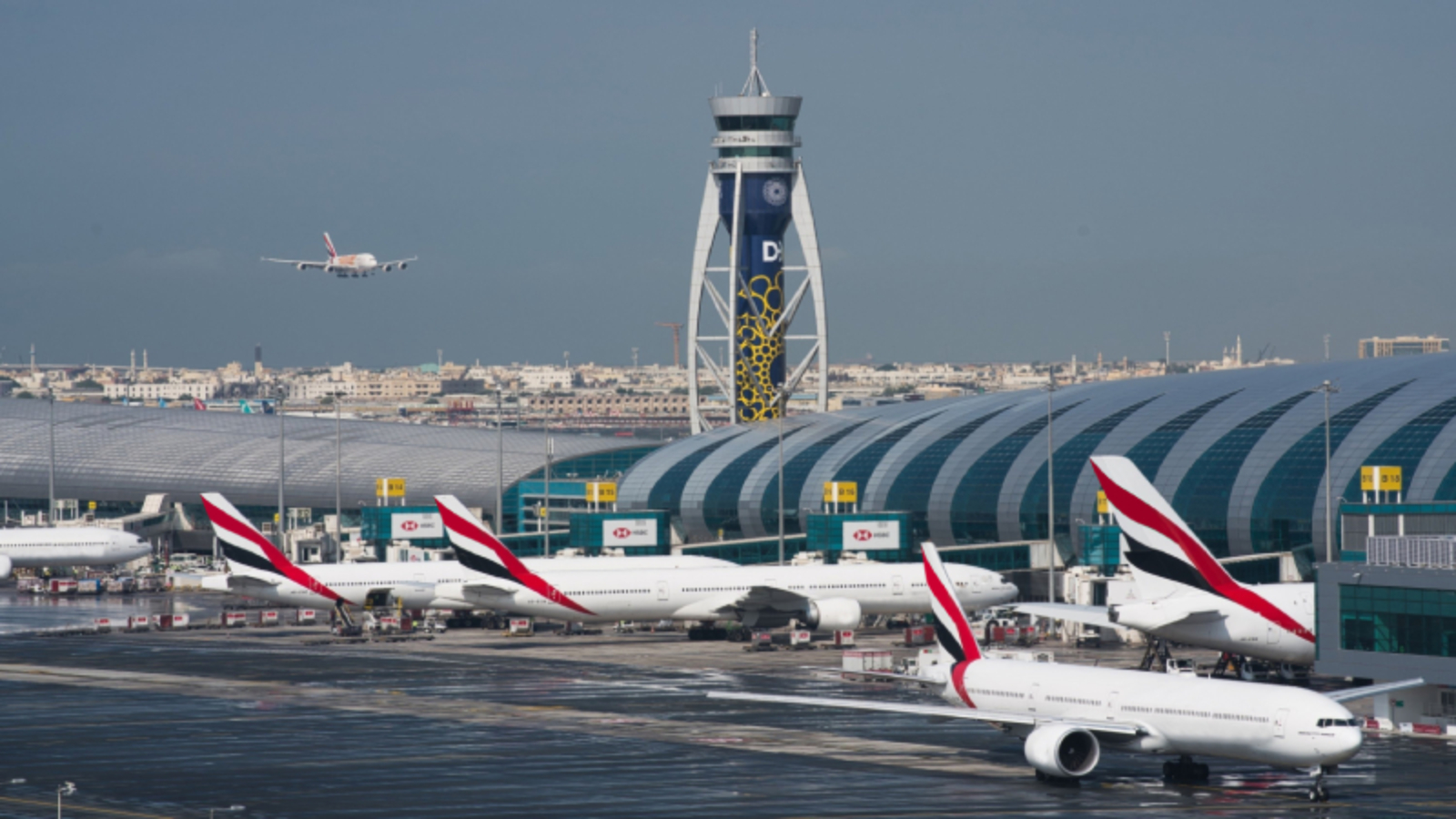 what tempts people to visit Gulf?

The Persian Gulf always has a identifiable presence in the aviation market. Synonymous with luxury, the place, which always attracts millions of air travelers from around the world every year, is home to several premium airlines. The airports are boosted with the latest technology, which gives it lavish reputation.

Later, many of the Gulf’s luxury airports have significantly raised the standards when it comes to customer service. Some of the region’s highly rated airports are second to none when it comes to the quality of service to its customers. But others entice travelers with a far more distinctive experience and sometimes with unique services.

Dubai International Airport (DXB), is been 60 years old, and is considered as one of the world’s busiest airports and a key cargo hub for the Middle East.

DXB was opened on September 30, 1960, in the city of Dubai, the capital of the Emirate of Dubai. Since then, the airport has always experienced exponential growth and rapid increase passenger traffic.

Since Dubai is a preferred business hub, which has always attracted some of the world’s top professionals, as well as an immensely attractive holiday destination, DXB continues to serve good numbers of passengers recorded despite travel restrictions caused by the global pandemic.

According to the latest DXB data, despite the industry being restrained and air travel was paused with reduced passengers in numbers by approximately 70%, the airport still served 25.9 million passengers in 2020. Pre-pandemic figures were even more higher and impressive. In 2014, the airport recorded maximum number of passengers flow and more than 70 million travelers passed through the building’s three terminals.

So, what makes Dubai International Airport so unique?

Firstly, the reason may be the airport size and capacity. DXB airport, which earlier had only a small single terminal building and a sandy runway capable of serving small 32-seat jets, is now been able to handle several types of aircraft, including the beloved aircraft type of international traveler’s Airbus A380 a super jumbo jet. DXB now spans approximately 29 square kilometers, which is roughly the size of 98 football fields.

Today DXB consists of five runways and three operational terminals, being divided to serve different air carriers. For instance, Terminal-1 serves all arriving and departing airlines, while Terminal-2 is dedicated to all special flights and scheduled charters.

One of the most prominent parts of the airport is Terminal-3, which, when it was constructed in 2008, was the biggest building in the world by floor size, occupied an area of more than 1.7 square kilometers which alone is capable of handling 43 million passengers per year. Terminal-3 is now the world’s second-largest building by its floor space.

DXB airport has been so ahead to implement and develop the most advanced technologies. In 2017, the airport initiated to offer the world’s fastest Wi-Fi connection.

When it comes to implementing artificial intelligence (AI), the airport is considered a leader to make its travelers satisfy by reducing the time needed to complete airport formalities of all procedures before departure and after arrival of flights and also making smooth movements of Pilots and Cabin Crews and staff of Airlines. DXB has almost eliminated the need for staff interaction during the passenger identification process.

As Terminal 3 installed Smart Gates, which allows UAE residents to skip long queues at passport control on arrival through new AI technology which not only saved time of aviation staff and airline passengers but streamlined the process. The advanced technology allows passengers to look at a green light installed at the gate and nullify the need to scan their personal document, to save time it allowed passengers to go by passport control within a few seconds.

By further developing the procedure in early 2021, DXB accustomed an improved biometric technology that mixed facial and iris recognition. These Biometric path touch points scan the faces of passengers and verify their identity.

In addition to it Dubai International Airport is also in style for a diversity of top-rated restaurants and amenities such as a gym, an indoor pools and spa facilities. The surrounding duty-free shops, artificial palm trees, luminous terminals, water cascades and near-Arctic levels of air conditioning makes DXB is a thoroughly modern airport.

For those who travel via private jet, DXB offers an dazzling VIP terminal, which measures approximately 5,574 square meters, and is dedicated to serve only the wealthiest and premium clientele. Currently, it is considered to be the largest VIP terminal in the world and is divided into three fixed base operators, each operated with a different private jet charter airline.

Passengers travelling by private jet are quickly transferred to the terminal via a chauffeur-driven Bentley or Rolls Royce. The live piano performed in the Terminal making atmosphere pleasant, it also consists of an hassle free passport desk and a very spacious resting rooms where in centre $4.5 million Bugattis are displayed. Passengers are offered a cappuccino, made using a $1,000 coffee machine, and served in a rich traditional cup, which reflects their own face. These are just few examples of what Dubai International Airport offers its more rich clients.

MCT based in Oman, is the huge and busiest airport in the country. Locals proudly view the airport as a symbol of prosperity and national pride. The airport itself is also one of the most luxurious place in the Gulf.

While the airport serves fewer travelers than Dubai International Airport, MCT was initially built to serve a single terminal. But, in 2018, MCT was expanded to a second terminal to serve international flights.

The Airports Council International in March 2021, the global trade representative of the world’s airport authorities, awarded MCT airport as the Fastest Growing Airport based on passenger satisfaction in the Middle East. MCT offers a full variety of duty-free shops and restaurants. But there’s something which makes airport unique apart from its competitors.

Before COVID-19, the airport established the first-ever incorporated transit hotel, where tired passengers can reserve a room for a short nap, or can book an overnight stay if needed. MCT served as many as 20 million passengers per year. So, the unique hotel offers an indoor swimming pool, a separate restaurant and a fitness suite.

MCT is also famous for its luxurious and exclusive Business and First Class lounges with 24-hour hospitality services. This is particularly useful for travelers wanting to have a long break between connecting flights, not preferring to take advantage of the transit hotel. MCT’s Prime class lounge also has a private cinema room and a spa.

At 34.3 square kilometers, Abu Dhabi International Airport (AUH) in United Arab Emirates can be considered yet another one of the Gulf’s extravagant airports.

It is the second-largest airport, after Dubai airport established in 1982. The building has been continued to expand and currently operates three terminals, featuring bi-level arrival and departure areas.

The airport is most distinguished for its seven different lounges, which provide different levels of passenger service. The luxurious stores, which sizes 253 square meters, displays a range of fragrances from all around the world. 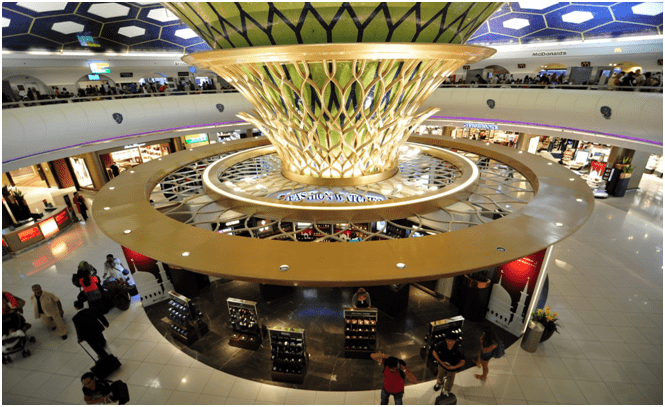 The Etihad First Class Lounge resembles a 5-star hotel in terms of hospitality. Passengers can try ranges of complimentary deluxe spa treatments, including massages and facials, alongside a fully equipped gym. There also exists a dedicated prayer room.

Meanwhile, passengers at AUX’s VIP terminal are offered first-rate service. The VIP terminal possess separate access, including parking and drop-off areas, as well as private immigration and check-in facilities, and exclusive limousine transfers between the terminal and the aircraft.

Passengers who opt for the VIP treatment are also permitted access to the Royal Majlis lounge, which is famous for the extreme level of comfort and luxury services provided in both Arabic and European hospitality. For example, while a passenger takes a few moments to enjoy delicious food, refreshments and various entertainment, a personally dedicated service agent completes all the necessary paperwork and airport formalities, including the task of checking luggage.

Hamad International Airport (HIA) in Qatar is most luxurious airports in the Gulf.

HIA became the first airport in the Gulf region and Asia to receive a 5-Star COVID-19 Airport Safety Rating issued by the Skytrax airport review and ranking based company in United Kingdom. It also became the first to achieve independent certification from the British Standards Institution for implementing of COVID-19 Aviation Health Safety Protocols When the COVID-19 pandemic hit the aviation industry in early 2020.

The ultramodern facilities was built on land reclaimed from the sea and its structural design reflects the coastal location, featuring a rooftop rippling away from the concourse in swooping peaks and troughs. It has an adjacent mosque resembles a giant blue droplet of water. 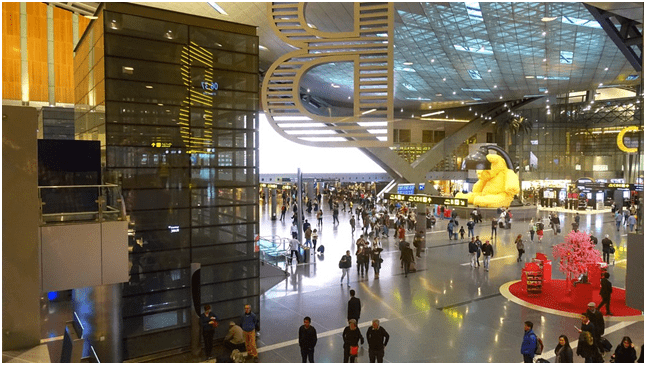 HIA, which used to serve more than 30 million travelers a year prior the pandemic is also famous for its museum-quality art program. All passengers are invited to visit constantly changing galleries, spread throughout the building featuring the latest works by world-famous artists.

Much like its competitors, HIA also offers several luxurious upscale boutiques, an airport gym with a 25-meter swimming pool, a 100-room hotel, a high standard restaurant, posh business class lounges and a special lounge for unaccompanied minors with play areas for children. Passengers are also given the opportunity to visit the private cinema, hydrotherapy pool or even the squash courts.

Airlines are more likely wanted to operate out of larger airports to serve a greater number of destinations. This results in a high volume of passengers passing through the building. So, its of no surprise that airports in the Gulf region are continuing to offer elite services to its passengers.